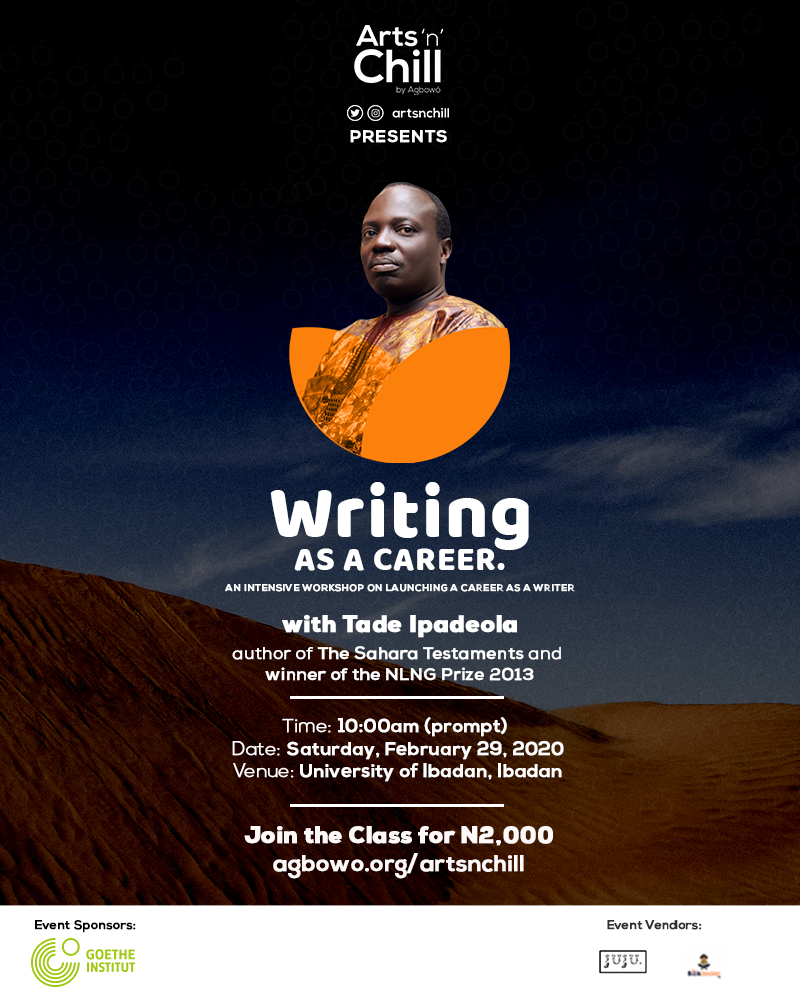 Writing as a Career Workshop with Tade Ipadeola

On Saturday, February 29, 2020, Arts n Chill will host a one day workshop around writing as a career. The workshop will cover key areas of interest, including how to launch a writing career, how to make and maintain useful contacts, promote with new media, and negotiate translations and rights amongst other things.

Tade Ipadeola is a Nigerian poet and lawyer, was born September 11 1970. He has three published volumes of poetry – A Time of Signs (2000), The Rain Fardel (2005) and The Sahara Testaments (2013) to his credit. He also has other notable works such as translations of W.H Auden into Yoruba and Daniel Fagunwa into English. He has published many short stories and essays. In 2009, he won the Delphic Laurel in poetry with his poem ‘Songbird’, in Jeju, South Korea.  His third volume of poetry, The Sahara Testaments – a sequence of 1000 quatrains on the Sahara – is his latest work which won the Nigeria Prize for Literature 2013. It is regarded as a candidate for the African canon. At $100,000.00, the Nigeria Prize for Literature commands the largest purse for a literary prize in Africa.

In 2014, Tade Ipadeola endowed the Kofi Awoonor Memorial Library with his Nigeria Prize winnings. The Library is one of the largest dedicated to African and World Literature on the continent.

He was chosen by the Rockefeller Foundation as one of 12 artists, scholars and leaders from around the world who were Residents at the Bellagio Centre in Italy all of November 2015.

The works of Tade Ipadeola explore geographies, history, prehistory, flora, fauna, language and identities. His works have been described as epical, demonstrating a striking marriage of sound and sense.

Tade Ipadeola is a past president of PEN (Nigeria Centre) and a past fellow of the Iowa Fall Residency Program.

Tade lives in Ibadan, Nigeria, where he writes and practices law.

About Arts 'n' Chill by Agbowó

Arts ‘n’ Chill by Agbowó is an events platform for creative Africans to share their works, get feedback and reach live audiences.

Through Arts ‘n’ Chill by Agbowó, we are providing spaces where creative Africans come alive to propagate new ideas, extend their freedom and enrich the lives of people to enjoy art. We are building a community that supports and enhances the work of creative Africans.

Visit our main page at Agbowó.org to view new literary works around Africa as well as our yearly lit + art magazine.