Whenever My Mother Asks Me to Describe Home | Jay Kophy

If you know something good is coming, you don’t care how long it takes. Or maybe you do but, suddenly, everything else seems to shrink and grow smaller and nothing comes close to the feeling of finally having it in your hands.

I did not remember what my mother looked like when I was eleven. In 2007, my father, my two brothers, and I stood at the arrival lounge of Kotoka International Airport, our eyes fixed on the gate, waiting for wife and mother. Around us, people stood craning their necks for faces of friends and family returning from their travels. We must have been there for long, our eagerness masking any sense of impatience we may have felt. My father and older brother, Reginald, knew whom we were looking for or, should I say, knew the face of Marian Yeboah. Did it make a difference? Was their joy any greater than ours, we who did not remember her? Will we spend the rest of our lives tracing our steps back to this airport, erasing seconds of moments where we didn’t know what our mother looked like?

My little brother, EJ, had been barely three years old and I, six, when our mother travelled to the United Kingdom in 2002 to search for good fortune. It was the trend then — win a lottery or save up enough money to fund the travel of a parent while the rest of the family stayed at home, basking in the pride of having a relative abroad. Being overseas was the dream; one lucky enough to have family outside of the country suddenly had a sliver of hope amidst the hardship in a crippling economy. It seemed nearly like a safe, a back-up plan, an arrangement that had you covered should you lose your footing. It didn’t matter that she had spent eight years cleaning the floors of shops and taking care of older people. It didn’t matter that the distance and absence of a mother could, in the future, grow into some wall between herself and her children. All of this seemed to disappear in the one good reward — that there was enough money to feed us, pay school fees, and buy new clothes for Christmas every year. Anyone would call that a good bargain.

At the airport, I remember my dad had asked me, “Will you see her when you see her?” and till date I do not recall my answer but if it was a resounding ‘yes,’ as was common with my giddy nature at the time, I must have been very disappointed when at last an average height woman in a loose purple sheath dress and a crepe jacket stepped out — or it may have been a purple skirt suit — and my brother ran towards her.

It mustn’t have taken long for EJ and I to catch up with the moment — this was her, this was our mother. And so we ran. I can’t tell what she looked like or the first words she had said to us. She may have marvelled about how much we’ve grown and after that could have been the words ‘I’ve missed you’ and after that could have been the still-life evidence — one more look at us, and if we looked well-fed, our cheeks round and collar bones not sticking out, a reassuring nod may have been given to our father for a good job done, for having raised three kids well enough, not as good as a mother would but close.

In the time that she was away, our father drove us to a small photo studio, at least once a year, for a family picture that would be included in an envelope filled with letters from us. My brothers and I would pose, standing next to each other, slightly turning our wrists to show off new plastic watches our mother had sent us. Every year it was a different gift we were trying to highlight — tipping our toes in new shoes, my brother touching the pockets of his new jeans, little things we thought were important than changes our bodies were going through every year — the extra height, a sore from school, the pimples breaking out on my face.

If every photograph told a story, our mother knew close to nothing about her family. Truths a picture could never tell: EJ’s uncontrollable anger (once, in a fight on our way home from school, he had pushed me into the street and pulled me back when a vehicle was heading straight for me), my growing fear of the cousin who lived with us, or my father hunched over a stove making spaghetti and milk at 5:30AM, breakfast we’ll have to gobble down in the car as he dropped our sleepy bodies off in a teacher’s house and headed to work, never wanting to be caught in Accra’s gridlock.

At the airport, our father did not run with us but only watched, as if offering us his own gift. Rather than bring along the bouquet of flowers he bought, he left it lying on the couch in the living room for my mother to find. A reserved attitude on public affection lies inherent in many Ghanaians, and for a man to display an emotional need of love, of having missed the woman he’s been married to for nine years, would have been a little too much.

My brothers and I hugged her in turns and on cue too, as though it were a play and we needed the firstborn to flash a card and direct us towards the next act. They weren’t the kinds of hugs that have you leaning on the other person, squeezing them tight to make up for their absence. In the months ahead, I would come to understand that the excitement I felt was more about the gifts she had for us than her homecoming. I was eager to wear the shoes and clothes from a London store, nothing like the slightly used ones at bend-down markets. I was smitten by the idea of her arriving from overseas, not the one where she arrives home and settles back into our lives — as a mother and a wife; a world in which, I was sure, she’d have to learn all over again.

As much as I try to open up the memory of what happened next, after my father, at last, wrapped his arms around my mother a little longer than our culture would permit, I find myself stuck at the same airport scene.

There is nothing else I remember from the day.

The rides leading to the airport and back home seem almost non-existent, almost as if we never did set off or arrive home. I’m unable to give up the impulse to shut my eyes tight and do the hard work of remembering and writing this has proven to be a heavier task than I’ll like to admit. I wish I could narrate a happy trip home, perhaps my siblings and I in the backseat talking to our mother, asking her questions about London. Or maybe how we had looked out the window as our parents spoke to each other, unsure what to say or think, and secretly counting down the minutes till we were home to find gifts in her suitcases. If I could remember, I would wish I wasn’t as happy, that my innocence wouldn’t betray how a child should truly feel growing up without her mother. I hope I was a little upset, although I doubt that. We speak of it as if it were not the cost of distance, what we lose when we watch the people we love grow up in handwritten letters and faded photographs.

There may, of course, be many reasons why the memory of my mother’s homecoming is tethered to the arrival lounge of an airport and stays unmoved. Despite everything I’ve come to know and accept about reconciliation, what I have to preserve may very well cost me joy and I choose joy.

I dare say the image of my mother walking towards me that day is the one I am most at peace with; a season in both of our lives where we’re not rotten down to the stumps with grief and anger against each other.

It’s the perfect scene — one that is not tarnished by toxic patterns of control and rebellion, one in which I’m running towards her and she has her arms open to receive me. In that moment, we were each other’s good thing.

Maybe I find comfort in the unchanging stillness of those minutes because every year after 2007 has been less calm and more storms between us. I have long confused presence with love, a mother’s silence with indifference and have made peace with being the daughter who makes everything about abandonment because I don’t know any better or maybe, just maybe, because the healing of a wound goes as deep as its roots and all we have are hands that graze the surface and never beyond.

True, there’s only been one homecoming and my mother hasn’t sat on a plane in eleven years but in my mind, every argument, every misunderstanding between us, packs up a bag (mine or hers) and sends us farther away from each other. I realise now the only promise I have to keep is to show up at an arrival lounge, ready and eager. 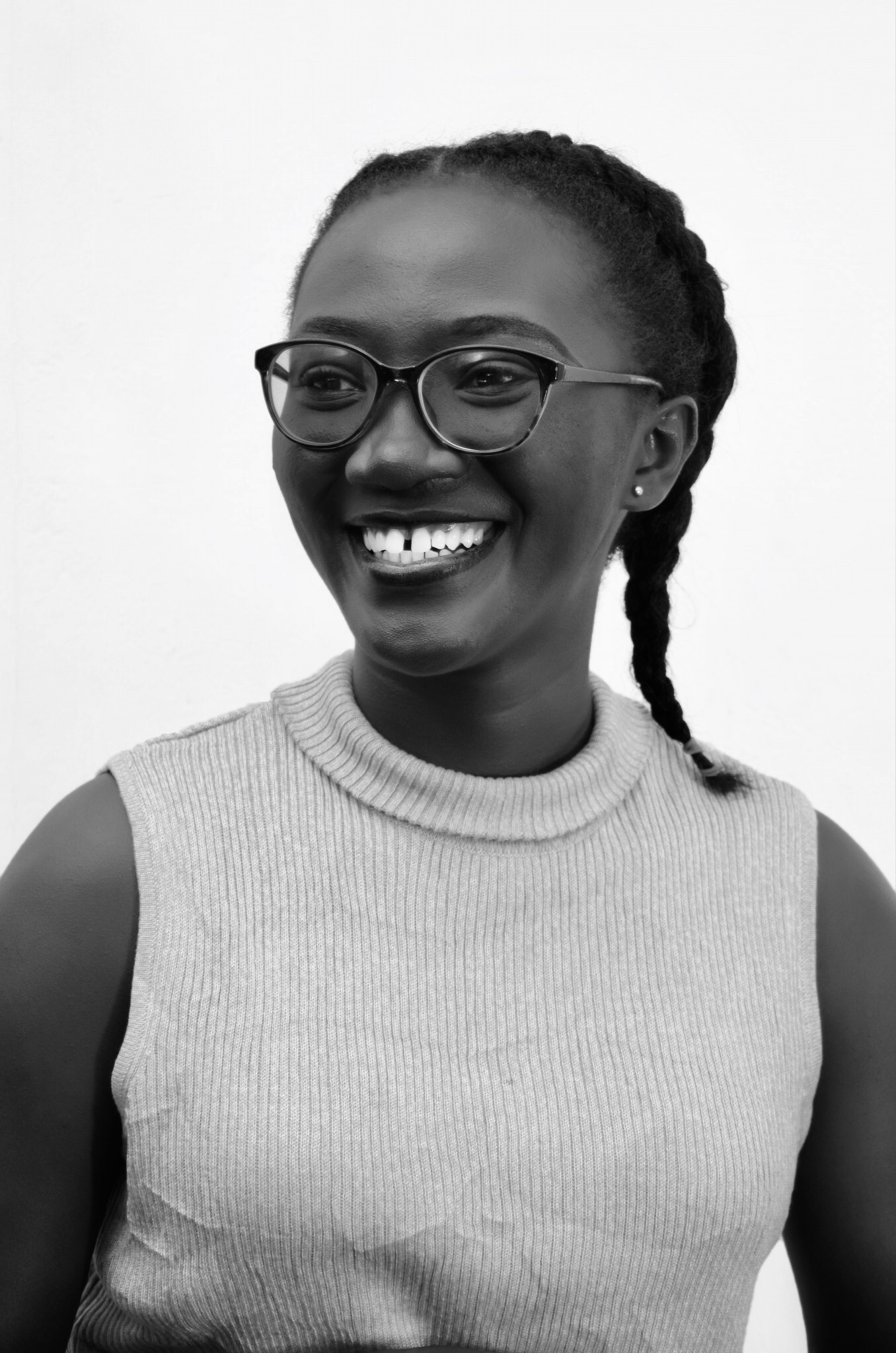 Tryphena Yeboah is a native of Bekwai, Ghana. She holds a BA in Journalism and an MA in Development Communication from the Ghana Institute of Journalism. Currently an MFA Fellow in Chapman University’s Creative Writing programme, she is a finalist for the Narrative 2019 Fall contest and three of her short stories are forthcoming in Narrative Magazine. You can find her on Instagram and Twitter using the name “Tryphena Yeboah”.